Darts Scoring and the Rules of Darts Explained

Home > How to Play Darts > Darts Scoring Updated: Mar 9th, 2020 This website is reader-supported. We may earn a small fee from qualifying purchases through product links.

Darts scoring can look daunting if you’re a total beginner, but it’s very straightforward. This short guide will teach you everything you need to know about darts scoring and how to play 501 darts.

There are a handful of different darts games, each with their own scoring systems and rules.

Most professional darts matches play a game called 501. It is by far the most common and well-known darts game, and it’s rules are very straightforward.

Understanding 501 darts will give you an excellent basis to go on and try other games, but it’s pretty vital to learn the rules of 501 darts first.

Matches of 501 are between two players, where each player takes turns and throws up to three darts. In darts terminology, each turn is referred to as a “visit”.

Both players start with a score of 501. After each visit, the total score for that visit (three darts thrown) gets deducted from the player’s total. For example, if I was throwing first in a match of 501 and the total score of my three darts was 100, then my remaining total would become 401.

To win a game of 501 you must be the first player to reach a total score of exactly 0. However, the final dart must land in either a double or the bullseye.

Because of this “double out” rule, the highest possible remaining score from which you can win in a single visit is 170. You’d have to throw two darts in the treble-20 to score 140 and leave a score of 50 for your last dart. Placing that final dart in the bullseye and scoring 50 would leave you with an exact score of 170, and you’d have “checked out” and won the match.

Checkouts like the example above (170 checkout) are very difficult and require pinpoint accuracy or a lot of luck. For most players, you would continue to score as normal until you reach a score where checking out becomes easier.

If you were to continue scoring as highly as possible until you have a total score of just 32 remaining, on your next visit, you’d have three darts to try and hit double-16 to checkout.

Top tip: Most players aim to leave a double for a number that divides by 2 repeatedly.

If you have 32 remaining and are aiming for double-16, you can miss and hit the single 16, making your remaining total 16, and giving you another double target (double-8) for your next dart to win the match.

If you had a score of 22 remaining and missed the double-11, scoring a single 11, you now have 11 left, which means your next dart can’t win the match. Instead, you’d have to waste a dart to hit a score 1 or 3 to leave you with double-5 or double-4, respectively.

If you continue to miss doubles, you’ll end up with a very low score and limited options to check out. You may even over-score. If you have a score of 10 remaining and score higher than 10 during your visit, your turn is considered “bust”.

Going “bust” means that the visit was null, and the game continues with your opponent throwing next and your next turn starting on your previous score of 10.

How Does Darts Scoring Work?

Now that you understand the rules of darts let’s take a quick look at the dart board and help you make sense of doubles, trebles, and the bullseye.

A dart board is shaped like a pizza cut into 20 slices. These 20 segments all represent a score (1 to 20). Here’s what a standard dart board looks like: 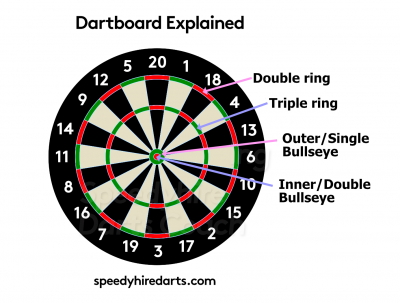 There are two narrow rings on a dart board, one inner ring halfway out, and one on the outside of the board. These rings are the treble and double rings, respectively.

Landing a dart in one of these rings acts as a multiplier for that segment’s base score; landing in the treble ring of the 20 segment nets you 60 points. The double ring of the 16 segment gives you a score of 32.

When you hear someone say “the bullseye”, they usually mean the inner red circle, the double bull.

That’s pretty much all there is to darts scoring. Though different games have different rules, most will adhere to this scoring system.

You can find specialist boards that are set up differently, but there are too many to cover here, and they usually follow a very similar scoring pattern.

There are an endless about of darts games, and each have their own rules. Some dart games are designed to be fast-paced versions of more popular rulesets, while others are great for fun in large groups.

Here are the rules for some common darts games that you can play on a standard dart board:

This lower starting score makes games finish quickly, and is perfect to use as a darts practice game where you want to focus as much on your checkouts as you do your scoring.

Because of the short nature of a 301 darts match, sometimes games are set up with a “double-in” rule. With the double in, you cannot start scoring until you hit a double. The first double you hit is included in the score for that visit, along with any other following darts.

Around the Clock Dart Game Rules

Around the clock is a simple game where each player has 3 darts per visit and must hit the numbers 1 to 20 in order, and finish by hitting the single-bull then double-bull.

Both start by throwing for 1, and after hitting it, the player can then move on to 2. The winner is the first player to “go around the clock” and hit every number 1-20 and the single-bull then double-bull in that order.

One of my favorite practice routines that I give to darts players who I’m coaching is a variant of around the clock.

In that practice routine, only hitting a double allows you to progress, and if you miss three darts at a double, you go all the way back to 1.

It can take minutes or hours depending on how well you play, but it’s a great practice routine for forcing you to tackle doubles you might otherwise neglect.

Cricket is a darts game that, as you may have guessed, emulates the scoring system of cricket.

In Cricket, one player is “batting” while the other is “bowling”. Each player takes turns of throwing 3 darts, exactly as they would when playing 501 or 301 darts.

To start a game of cricket, toss a coin to pick which player “bats” first.

The game continues until the player who is bowling hits a total of 10 wickets. When this happens, the players switch roles.

The game ends when both players have had two turns batting, and the player with the highest score from their batting phases combined is the winner.

Thanks for reading, I hope you found this guide useful to help you learn how darts scoring works and how 501 darts is played.

If you’re struggling, or want to take the next step in your darts career, book a coaching session with me, or drop me an email at jason@speedyhiredarts.com.

"Jason knows darts inside out, and knows how to teach quickly."
- Mick F, Brighton

"Two hours on Skype with Jason helped me shake my curse with double 8!"
- Barry W, Chicago

"Spotted my issues straight away and helped me fix them in 3 sessions."
- Robert S, Manchester

"Worth every penny just for the practice drills Jason gave me."
- Jordan R, Texas

With Speedyhire Darts Coaching, I've been training players of all skill levels. I'm yet to find a problem I can't help someone overcome. Read more.